Studying the language is not only about understanding the grammar and structure of the language, but it is also about how people live and use the language on a day-to-day basis.

French can be studied in either your first or second year as an AS Level qualification or over two years as a full A Level. A typical class includes a wide range of activities such as general conversation in French. We then study some aspects of the structure of the language, and then look at some source material in French, using sound recordings or video extracts, written and spoken sources or the Internet.

Theme A – Being a young person in French-speaking society:

Theme B – Understanding the French-speaking world:

Theme A – Diversity and difference

All students studying A Levels should have at least five GCSEs at grade 9 – 5 in academic subjects, including English Language at grade 5. Two of these should be grade 6. Specifically for French, there is a minimum entry requirement of a grade 6 in French at GCSE. If you have spent a significant amount of time in a French-speaking country, it may be possible to join the course, after discussion with your tutors.

Both AS and A Level French are assessed through three examinations:

Apart from being beneficial at a personal level, your A Level in French can help with quite a few career paths. For those who want to specialise in language, there are teaching, translation or interpreting. There are also travel and tourism, journalism and the diplomatic service. You can combine a lot of subjects at university with French, for example, Art and French, Business and French, History and French, Law and French, Mathematics and French. But even as an engineer or designer, being proficient in a language will give you broader career options. 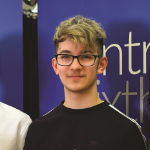 B grade in French A Level

A & B grades in Media & English Language

Studying Broadcast Journalism at the University of Salford