Politics is the study of conflict and power. If you follow the news and care about what is happening in the economy, in government or foreign countries, A Level Politics may be the right subject for you. In any society, there are arguments about how we should run our lives and allocate scarce resources. Politics is the study of these disagreements and how they are resolved. In a democracy such as the UK, these conflicts are resolved peacefully through voting or pressure groups. However, in other countries, or on the world stage, violence, terrorism and war are used to resolve differences. Politics is an exciting and dynamic subject which draws on real examples from the world around us to answer the question of ‘how should we live our lives and organise our affairs?’

For the AS Level we look at some of the important ideas that we associate with politics and how they apply to the British political system:

We will look at democracy, elections and voting behaviour, the different political parties and their ideas, the role of pressure groups, the role of Parliament, what the Prime Minister does, how well our rights are protected by the courts and how membership of the European Union has affected the British political system, among many other things.

For the A Level we will turn to look at the political system of the United States of America:

We will look at how the Americans make political decisions, focusing on political parties in the United States, the politics of race, what pressure groups do, how the Congress works, what the President does, and how the American Supreme Court protects liberties. You will also make comparisons between how politics works in the USA and the UK.

You will also look at a range of ideologies such as Nationalism, Liberalism, Conservatism and Socialism.

All students studying A Levels should have at least five GCSEs at grade 9 – 5 in academic subjects, including English Language at grade 5. Two of these should be grade 6.

Both AS and A Level Politics are assessed through a series of written examinations. The examinations are a mixture of short answers, structured questions, essays and data response.

Students who have studied Politics often follow the subject at degree level or study for a related subject such as History, Law and Sociology. The study of Politics is useful in a wide range of careers such as the legal profession, the civil service, teaching, local government, politics, and pressure groups and charities. 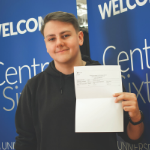 A* in A Level Politics

Studying History at the University of Bristol