Studying A Level Law is captivating, thought-provoking and provides a fantastic insight into what it would be like to study Law at university. This course is ideal if you are interested in pursuing further study or a career in the legal sector. It is also a fascinating course if you are interested in current affairs and want to develop your understanding of them and why the law deals with things in certain ways.

Law can be studied in either your first or second year as an AS qualification or over two years as a full A Level.

Firstly students will delve into the various sources of law. By this, we mean how the law is made and who is responsible for making it. We study the operation of judicial precedent within the courts. This means the decisions of previously decided cases applied to current cases of similar facts and legal principle. The making and interpretation of statutory law is also an important subject. In addition, the Civil and Criminal Courts systems will be explored. In the latter part of the first year, you will develop an understanding of the basic principles of the law of Tort (Negligence). We also study an introduction to Criminal Law and concentrate on the non-fatal offences, in particular, Assault, Battery, ABH and GBH.

In the second year, the course focuses upon Criminal Law in much more detail. A student can build upon the understanding of the basic principles gained in the first year to develop a detailed knowledge of the law of Murder and Manslaughter. You’ll study specific aspects such as Theft, Robbery and various defences such as insanity intoxication and self-defence. The law of Tort is analysed in great depth and topics such as psychiatric injury due to negligence are explored.

There is no coursework for this A Level. Both AS and A Level are assessed through a series of written exams. There are three units in total. The examinations are a combination of essay questions and problem scenarios which the student is required to analyse in depth and apply their knowledge of the law to the situation.

Many students who have studied a Law A Level choose to study it at university and qualify to become either a solicitor or a barrister. Law is, however, a sound academic subject that can be useful if you want to go on to take related subjects such as History, Politics, Business or Criminology at degree level. 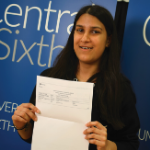 A* grade in Law A Level

B grades in Maths & Business

Studying Law at the University of Birmingham